So, my phone got totally screwed up and I had to reset it.  In the process, I lost all my pictures.  I know!   I'd wanted to show you some pictures from the writers retreat I participated in last month and, of course, they're gone.  But I had some pictures of the amazing lake cottage in Ontario from the last time I was there, and I thought you could salivate over those, even if you don't get to see pics of the writers hard at work.

So, here's a blog post I wrote after my return:

Writing’s a pretty solitary endeavor.  I have a home office, of sorts, where I spend most of my time—alone, writing or editing.  I really love my office space, though.  I’ve claimed about a fourth of the living room.  Backed by bookshelves and surrounded with an L-shaped desk, I’ve carved out a little niche for myself.  It’s open to the room, yet truly an office space.

I’m perfectly happy to work there, alone.  In fact, I prefer working alone.  People are always talking about writing retreats and conferences, writer’s groups and book groups and, though I’ve been to a few conferences and really loved them, I have to admit, I value my privacy and the idea that I can do what I want, when I want and how I want.  So, when a writer-friend of mine told me she wanted to set up a writer’s retreat at her lake cottage and she wanted me to come, I wasn’t so sure I wanted to.

I knew I
wanted to go to her lake cottage.   I’d been there before and loved it and I love spending time with her and her partner, but actually write and discuss the craft of writing with other writers?  I didn’t know.  I also didn’t know whether I’d be able to write with others around as that’s not how I work.  But I said okay. 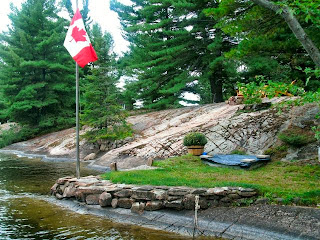 We spent our days writing.  The retreat was dubbed, "Writing Eh!" by Laura.  It stuck.  Kinda catchy, eh?
There are several pictures floating around of a bunch of people sitting at a table, engrossed in their laptops, silently clicking away.  And in the evenings, we talked, read our work to each other, played Cards Against Humanity (which is a great game, if you don’t already know about it), ate fantastic food and drank copious amounts of wine and spirits ‘cause yeah, that’s what writers do… I know, it seems improbable, but that’s what we did and it worked really well.  I advanced the novel (the third Melinoe book: A Slave of Melinoe) by quite a few thousand words.

“What is this place?” Adam asked.
The slave clipped Adam’s wrist cuffs to hooks at the top of the table, just above his head.  He pulled rails out from the end of the table, near Adam’s bottom and angled them out slightly to the sides.  They had stirrups on the ends.  Taking Adam’s right foot, he lifted the leg and placed the foot in the stirrup and fastened the cuff down.  He did the same with Adam’s other leg.  The rails were short, making Adam’s knees bend and his legs fall open.  He brought his knees as close together as possible, given how he was fastened but he realized that no matter what he did with his knees, his anus would remain completely exposed to whatever ministrations the mistress, or her slave, wished to perform.
He heard a printer spit out a sheet of paper and the slave went to fetch it.  While he was reading the printout, Adam asked him again, what this section of the training area was for.  The slave pulled jars of powers down from a cabinet, ignoring Adam.  He filled a stainless steel bucket with water from the sink and began measuring the powders and adding them to the water in the bucket.  After stirring the solution he’d made, he set the bucket on the counter and said, “Enemas.”  It was then the mistress entered the cubicle.  She took the printout from the slave and perused it before coming over to Adam’s side.

But enough of that, for now.  Because this retreat had such a plethora of Under Her Thumb authors, I’m going to suggest that you might want to check out the book, if you haven’t already done so.  It’s my latest.  It’s fem dom and it’s full of amazing stories by amazing writers, including me! 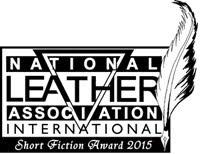